Everyone that knows my work has noticed that I use the lightbulb imagery pretty often. Not everyone knows why.
I have two reasons, and they both were formed when I was an artisan at the Barter Theatre in Abingdon, Virginia.

At the time, I was a recent graduate, trying to find a place in the world, trying to figure out what was what. I was intrigued by the story of Diogenes,  who would walk around with a lantern searching for an honest man. He slept in a large ceramic pot and lived in poverty, I could barely afford to eat and I slept behind the sofa in the kitchen of a friends apartment. I had also minored in Philosophy, so I was too heady for my own good. But most importantly, I was actively seeking my Karass. I was looking for an honest life.
I first painted Diogenes as myself inside a theatre. I had access to lots of scrap wood and pieces of sets after the shows would come down. The piece Diogenes at the Barter was from a door and measured roughly 9.5 feet tall by 4 foot wide. It was a monstrous piece for me. I depicted Diogenes holding his lantern surrounded by electrical wires and theatrical lighting. It was a product of my jumbled mind and living conditions at the time. Everything was crowded. Everything felt like a mosaic. Everything felt larger than life. My sense of the lantern evolved to utilize the background electrical wires and became a lightbulb. A Modern Diogenes. 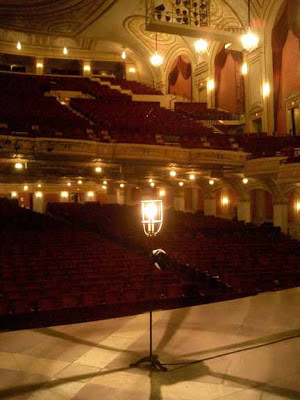 The other image of a lightbulb came from a theatrical device know as the Ghost Light. A plain lightbulb set on a pole and stand, protected by a cage, with a long extension cord.  As a set painter, I often had to work late at night doing touch-ups after the show had come down, or work on set on Mondays when the theatre was closed. After everyone leaves the theatre for the night, the Ghost Light is set out. So, often it was me that set it out and i really loved doing it. Practically, it is a safety light to keep people from wandering around in the dark and falling of the stage. Superstitiously, and far more interestingly, it is to keep the ghosts of the theatre happy and comfortable. And everyone knows that all good theatres are haunted. I certainly recall some very creepy nights at the Barter Theatre. Here's an article about the Barter. Symbolically for me it is a beacon for something that may or may not exist. It is a metaphor of faith. Of constancy. And of hope and kindness.

I began using imagery of lightbulbs, fire, and lanterns in a number of paintings. As a fan of creation stories, I imagined Prometheus as giving the gift of electricity and light instead of fire. And through that I imagined light bulbs to by symbols of consciousness. A spark of life given by the gods to set humans apart from other animals. I created small paintings of electrical outlets, of wires and switches, of sparks and of light bulbs. Sometimes i created larger more narrative pieces, such as Diogenes (pictured to the left).

This piece was the piece that actually made me start working more sculpturally. I wanted the lightbulbs, plugs and electrical outlets to pop out from the picture plane. At this point I began creating painted fiberglass castings and started to use real lightbulbs in the mold making process. 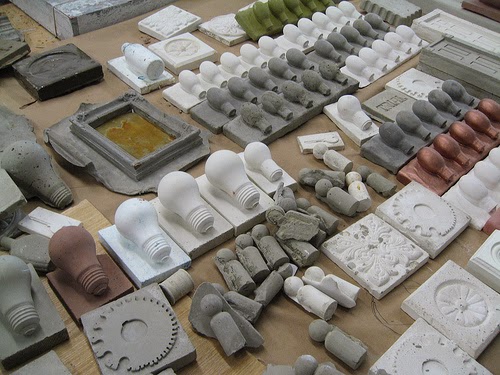 Soon I moved on from fiberglass to working in concrete. I created many concrete castings of lightbulbs to sell at street festivals and art fairs.
This produced lots of experimentation and surface treatments. 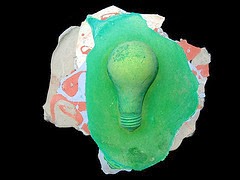 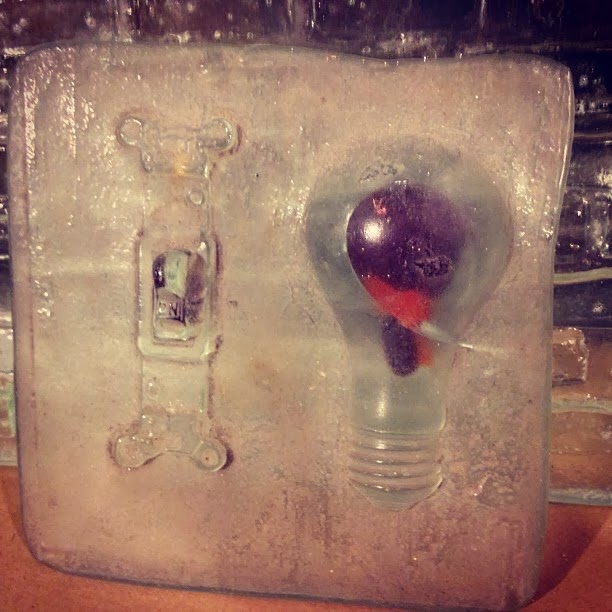 I then found the process of working in cast glass to be the most satisfying. This was my very first glass casting

I begin creating glass pieces with wild abandon, as often as I could. At first I made small singular lightbulbs that were individual pieces or attached to larger mixed media pieces. I began to develop narratives with the Lightbulbs in glass and deeply explored many possibilities. I added colored float glass to the pieces, colored frit to the pieces. I painted them with all kinds of paint. I gold leafed them. I even coated them with concrete.


I continued to use the Lightbulb as a symbol of hope. of dreams. and of the inner strength we all have. I had always wanted to build a lightbox to display my pieces, but I really hate fluorescent tubes, I didn't want something inefficient, or to generate too much heat, or to create a lot of bulk in the piece.
Finally I found two products I liked and began backlighting my pieces which gave me the ability to do more complicated paint work on the glass. I decided that my first backlit pieces would be fairly large, The largest glass pieces i'd ever done in fact. 3 Foot by 2 Foot.
I have now created a number of backlit glass panels using the lightbulb( among the other pieces i make) 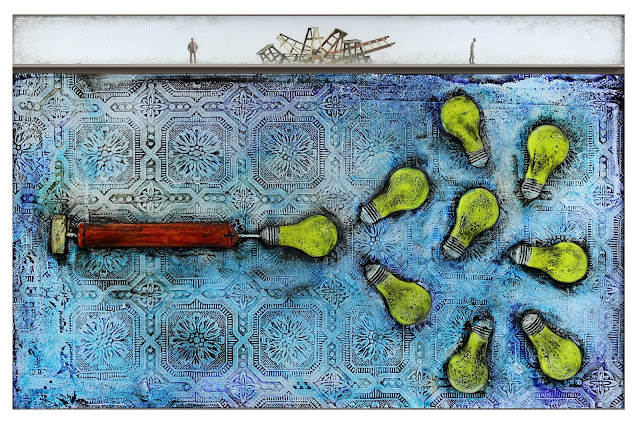 Heres a photo set of many more lightbulb pieces 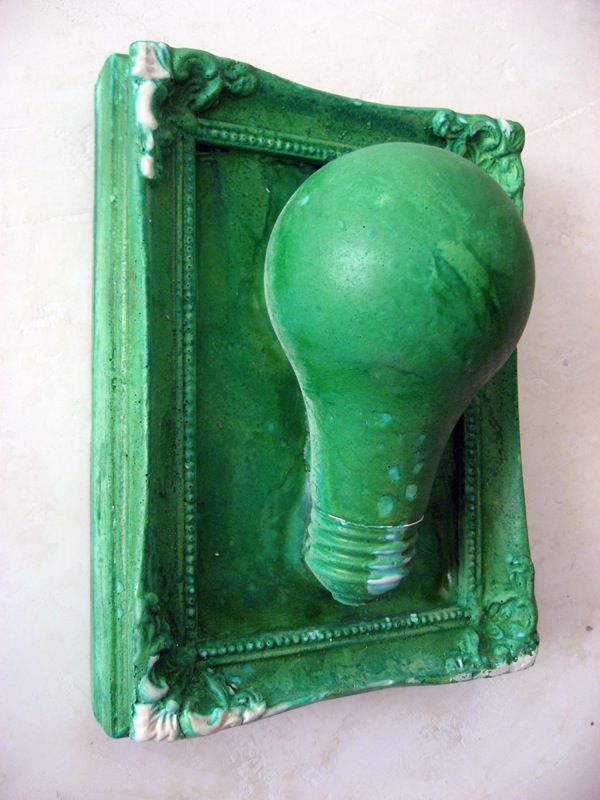