Come see, and add to The Idea Tree at the Mt. Pleasant Temporium

For the Mount Pleasant Temporium event, wife and husband artist team Rania Hassan and Sean Hennessey created an installation in the window titled "The Idea Tree." The Idea Tree represents our neighborhoods, our City, and our homes. Constructed using recycled cardboard and wood, drawings, cutouts and small structural elements create a sense that the tree is made of buildings, towers, and houses. Our ideas, our hopes, our dreams are the things that help shape what our neighborhoods are, what our city is, and what it can be. Visitors to the Temporium are asked to contribute to this installation by answering the questions, "What do you want for Mount Pleasant?" and "What do you want for DC? Sharing thoughts and ideas on green slips of paper, and adding these "leaves" to the tree make our neighborhood tree blossom. Together we can watch our ideas grow. 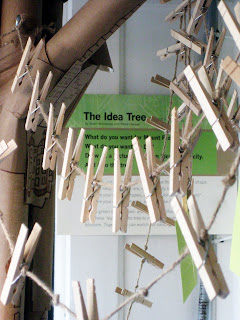 The Mt. Pleasant Temporium is a temporary, pop-up retailer coming to Mt. Pleasant St. NW from February 18 – March 13. (See retail hours and transportation). It is located in an under-utilized storefront at 3068 Mt. Pleasant St. NW. The space is on loan from Nana, which will open in March.
The Temporium features handmade goods for sale from 30 local, independent crafters and artists, as well as special events—autobiographical and theatrical storytelling, crafting, trunk shows, and live music.
This project was developed by Mount Pleasant Main Street, in partnership with SpeakeasyDC, Hello Craft, Radio CPR, Partners for Livable Communities, and the DC Office of Planning. The Temporium is supported by the DC Office of Planning’s Temporary Urbanism grant. Temporiums help meet several objectives established by the District of Columbia through the Creative DC Action Agenda, the Retail Action Roadmap and the Mount Pleasant Street Revitalization Strategy.
Schedule:

Herndon’s downtown art center, ArtSpace, is pleased to announce the opening of a new exhibition, “The Elements,” featuring the imaginative work of four contemporary artists:
Sherill Anne Gross, Sean Hennessey, Sean Lundgren and Alexandra Zealand.
Anchored in the classic elements of Hellenic physics - Water, Fire, Earth and Air - these artists use the elements as a part of their medium, rather than as the subject of their works.
Paper can not be created without water; ironically too much water can also destroy paper.  Early fire pits dug into the sand had the side effect of also causing the first forms of glass, when the extreme heat of the fire melted silica.  Dirt is the earth, the source of clay, and the root of life.  Air is the space that floats between suspended objects, allowing for movement, light and shadow. Air is also the catalyst for physical transformation.
Sherill Anne Gross is a dc based paper artist. A love of collage and printmaking led to experiments with different techniques while trying to incorporate both passions into her work. Eventually the experiments were made solely using paper, and the challenge of transforming a finite color palette of flat square papers into realistic final images remains an exciting challenge with each new piece. Sherill Anne Gross’ work has been seen in many venues across the country including: Gateway Arts Center (MD), Elroy ArtSpace (OR), Harold Golan Gallery (FL), Foundry Art Center (MO), Allenton Gallery (NC), Ratner Museum (MD), Artomatic (DC).. She is also the owner of the graphic design company sagworks, and a resident artist at the Greenbelt Community Center. sagworks.com
Sean Hennessey is a sculptor, painter, and glass artist. A graduate of Berea College, Sean worked in professional theatre for ten years and has bridged the theatre and fine arts community since moving to DC in 1997. His works have been seen in many contexts and venues including: The Shakespeare Theatre, The Kennedy Center, the Wooly Mammoth Theatre Company, National Geographic, Discovery Channel, HGTV, Arena Stage, Smithsonian Folk Life Festival, Signal 66, The National Institutes of Health, The Ratner Museum and Artomatic.  He’s the owner of Scenic Artisans LLC, a decorative paint and sculpture service, and a resident artist at the Washington Glass School and Creative Arts Center. dcsean.com
Sean Lundgren moved to the DC area in 2007, shortly after receiving his BFA from Alfred University with a concentration in ceramics.  A process driven artist, Lundgren has been a member of Red Dirt Studio for 3 years and works as an artist's assistant to DC based sculptor Margaret Boozer.  Lundgren's other mentors include a sculptural potter, an installation artist, a performance artist, a glass artist, and a blacksmith. He has exhibited his raw clay work in DC, Maryland, and Virginia, where his piece “Site Singularity” was reviewed by the Charlottesville News and Arts in September 2010: “Artists always struggle to make their material conform to their vision, but this DC sculptor takes an ingenious turn and allows the medium to prevail.” seanlundgren.com.
Alexandra Zealand is an installation sculptor. Originally trained in theatre design, she received an MFA in Sculpture from Pratt Institute.  Since moving to Northern Virginia in 2006, her work has been seen at the Target Gallery, Evolve Urban Arts Project in DC, the artdc gallery and Artomatic.  Her installation “Flock” was named Best of Artomatic 2009 by Art Seen Blog, and her January 2010 exhibit at the Delaplaine was reviewed by the Frederick News-Post.  She was invited to install a coffee filter piece at the preview party for the new Arlington County Artisphere in Oct. 2009, and a film strip piece at the closing awards for the 4th annual Alexandria VA Film Festival in Sept. 2010.  Fascinated by mummies, volcanoes, continental drift and zombies, she spends her days doing social media and reference work at the Arlington Public Library. alexzealand.blogspot.com
Elements
ArtSpace Herndon
Reception: Saturday, February 5, 6–8pm
Exhibition Dates: February 5–26, 2011
Gallery Hours: Tuesday–Thursday: 10am-2pm, Friday: 10am-8pm, Saturday–Sunday: 12pm-5pm, Closed Mondays
750 Center Street, Herndon, VA
Tel: 703-956-6590
Click here for more information.
Posted by Sean Hennessey at 9:31 AM No comments: