I created these paintings recently to help add interest and signage to Field to City, a specialty organic and local market in the Bloomingdale neighborhood of Washington, DC. You can see more of my paint work here
The layout and images of this mural was designed by Merry Alderman
Posted by Sean Hennessey at 10:26 AM No comments:

I've been working on creating the model for the trumpet project I mentioned before. I've also been doing a few tests on materials. I wanted to find a concrete casting product that was fiber reinforced,  as strong as possible, and as resistant to freezing and thawing as possible. I wound up choosing NeoMix D, a two part polymerized cement system. I was able to create a very strong casting at less than one quarter of an inch thick. That's pretty sufficient for what I need.
Then I needed to see how the cement accepted colorants. I'm going with a sienna color for the trumpet. I think it will compliment the blue of the figure very well. I will still do a few more tests on this.
So I began building my model. My first step was to create the center portion since that holds everything together. I first tried creating it in foam, but i need it to be much stronger so I went with wood.

Once that all came together I added the prototype bell created in glass. Still a little tweaking will need to be done. 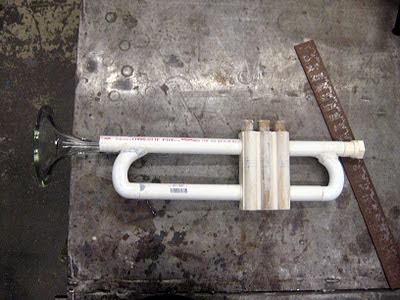 I roughed in the glass inserts that will act somewhat as a sun catcher, and add a bit of a glimmer to the piece. 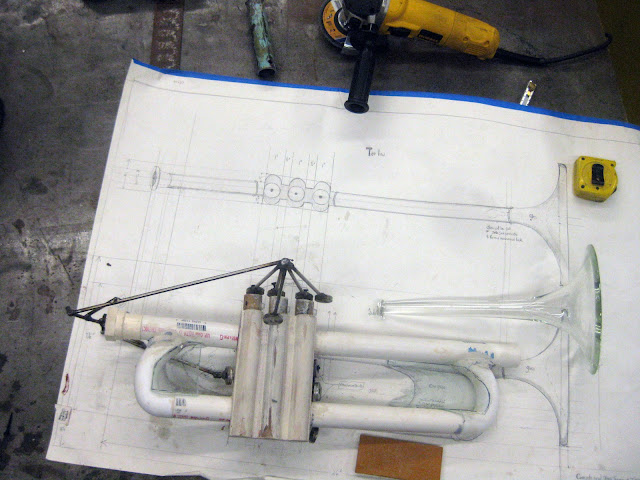 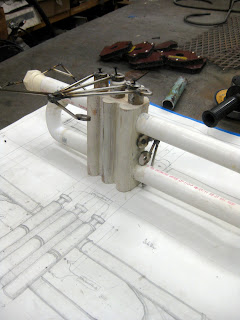 I still have a lot of fine tuning and cleaning up of the model and adding a bit of detail here and there before prepping the model for moldmaking.
Posted by Sean Hennessey at 9:20 AM No comments:

I've been sitting on this news for a while now and it's burning a hole in my harddrive. I'm very excited to announce that I will be working on a project for the the restoration of the Howard Theater in Washington, DC.
The Howard Theatre was a Beaux Arts Style theater built in 1910.  During its peak it catered to an African American clientele and was an extension of U streets "Black Broadway".  Many famous acts came through the Howard including Duke Ellington, Danny Kaye, Abbott and Costello, Cesar Romero, Pearl Bailey, Buddy Holly, Sarah Vaughn, Dinah Washington, Sammy Davis, Jr., James Brown and the Flames, Otis Redding, Lena Horne, Lionel Hampton, Redd Fox and Chuck Brown. Just so many  amazing shows!
The Theatre closed in 1980 and has sat empty for the past 30 years. Plans for renovations were long and extensive but have been underway and the reopening is scheduled for April 2012. The artist Brower Hatcher and his team at Mid-Ocean Studios won the commission to create a public art installation at the Howard Theatre.
This is the design that he created 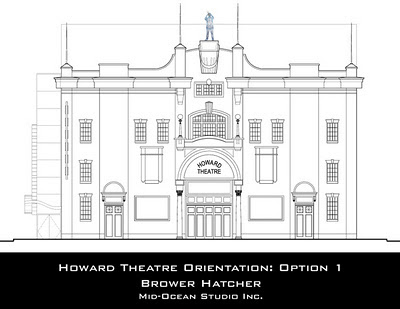 The design is a free standing trumpet player to sit atop the theatre. His sculpture is constructed of powder coated stainless steel rods. It is the practice of Mid-Ocean Studios to often work with artists in the cities that they have received commissions. After a series of portfolios reviews and questions, I was asked to participate.
This is a dream project for me in many ways. The Howard Theatre is a building I walk by often. It is only 6 blocks from my house and with both my history in working in theatre and my fascination of urban american ruins, I have been very drawn to the space. I have also been looking for ways to get into public art and haven't yet had the opportunity. This is a great thrill and honor for me. And I've been so excited I can hardly stand it!
So what am I doing? I'll be creating the trumpet that Jazz Man is playing!
Here is my design:
The overall trumpet will be in cast concrete. the bell of the trumpet will be in cast glass. I have also added cast glass pieces in the negative space of the trumpet.  To create the final piece I will construct a mock up in clay, wood, metal pipe, cut glass, and found pieces, then make a 2 part rubber mold of the maquette. I will cast the bell section in wax, make a plaster /silica mold of the wax, melt the wax out, and fill the void with glass which I then fire in my kiln. I will fit the glass sections into the rubber mold, add a stainless steel armature, and pour tinted concrete into the void. After the concrete sets up I will demold the piece, clean it up, and seal it.
In addition to the trumpet sitting on top of the theatre, I will be making an additional one for a display in the lobby.

This month I will be growing a moustache for charity. The event is called Movember  and we will be raising funds and awareness for men's health issues including prostate cancer.

You may donate to this cause here


Where does the money go?
From the website
The Movember Effect: Awareness & Education, Survivorship, ResearchThe funds raised in the US support prostate cancer and other cancers that affect men. The funds raised are directed to programs run directly by Movember and our men’s health partners, the Prostate Cancer Foundation and LIVESTRONG, the Lance Armstrong Foundation. Together, the three channels work together to ensure that Movember funds are supporting a broad range of innovative, world-class programs in line with our strategic goals in the areas of awareness and education, survivorship and research. For more information on the programs we are funding please visit the following:Prostate Cancer FoundationLIVESTRONG, The Lance Armstrong FoundationAwareness & EducationGlobal Action Plan

Watch my moustache grow!
Day 1: Clean Shaven
I just signed up yesterday, the official first day of Movember, so I will start today clean shaven. 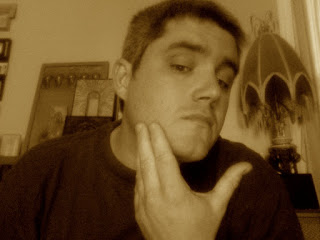 I'll post my progress through the month.
Thanks to those that have already supported the cause!
Incidentally, one of my supporters was also someone I participated in the 1997 Washington AIDS ride with. That was the first, and last time I attempted to raise funds since it wound up costing me a lot of money. I had moved to Washington, DC in 1997, with a job, a bike, and about 50 dollars. I signed up for the Shakespeare Theatre AIDS ride team. There was a commitment to raise a certain amount of money  and I was unable to raise the appropriate funds and wound up having to pay a lot of money out of pocket. Money that i didn't have. I did not know many people in DC yet, had no social networking sites to utilize, and had never tried raising money before.  It was a very bad year for someone that was working in the arts, in a new city, and very very cash strapped. Plus the AIDS ride was very strenuous and since i was riding on a cheap mountain bike, and had never done a long distance ride, it really kicked my ass. This completely put me off of all fund raising endeavors and made it really hard for me to ever want to ask people for money again. So it is with great reservations and humility that I accepted the request to join TEAM BOUNDARY STONE in their goal to raise money.
So thank you Lynn Coughlin for helping out!
If you are so inclined, you may contribute to our cause here:
http://us.movember.com/mospace/2073650/
thank you.
Posted by Sean Hennessey at 1:48 PM No comments: